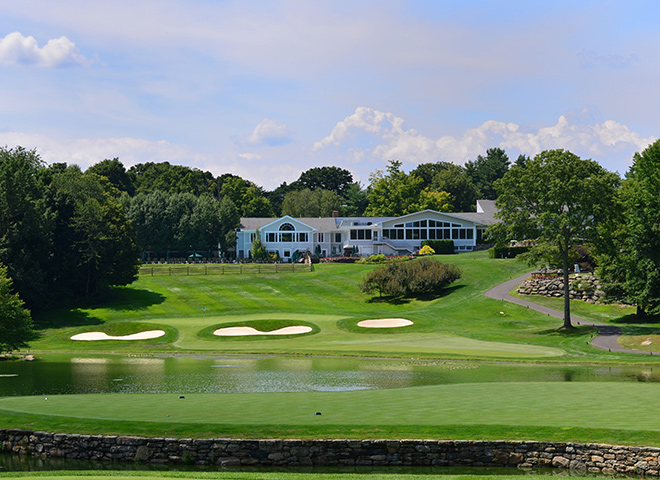 A History of Rockrimmon Country Club

At a dinner party in 1947, a few visionary Stamford residents began to talk about golf, an idea for a new club, and their desire to build one of the finest courses in New England. The idea took hold and with the purchase of "Ayers Farm", a 218 acre parcel spanning both sides of the Connecticut and New York state line, Rockrimmon Country Club was born.

By the summer of 1949, the first nine holes were open and the course was proclaimed by Jones to be "One of the most beautiful and enjoyable courses along the eastern seaboard". These nine holes were laid out across the original farmland and comprised today's holes 1, 2, & 8-14. The new course included a most unique feature, a golfaltor, a small tram to carry players and caddies up the steep incline from the ninth green up to the 10th tee.

After operating out of the original farmhouse, today's green superintendent’s residence, a small clubhouse was built in 1950, situated on a hill behind the ninth green and overlooking Ayers Pond. This structure contained men and women's locker rooms, a lounge, dining room and kitchen. In 1951, the swimming pool and clay tennis courts were added. Country Club life was in full swing and dinners, dances and parties were held regularly. Even Benny Goodman, a longtime neighbor, was known to drop in.

In 1953, the membership voted to add an additional nine holes in the forested valley at the far end of the property. With Robert Trent Jones now occupied with other projects, architect Orrin Smith was selected to complete the master plan. Smith built upon Jones's second nine-hole design, re-working water hazards on the 4th and 15th holes and changing the design of holes 5, 6 and 7 in both par and layout. Lake Calmon, adjacent to the 5th fairway, was also built to supply the course with needed water. In 1955, with land acquired from the adjoining estate, the second nine holes were finished and the 18-hole layout, as it is played today, was complete and open for play.

As the club flourished, and its membership grew, demand for additional space and amenities increased. In 1961 the present clubhouse was constructed and the former clubhouse building became pool locker rooms and staff housing. A major renovation of the clubhouse was completed in 1996 resulting in spectacular views from a new cocktail lounge, a larger and more open dining room and significant facilities upgrades. Subsequent projects have included newly renovated locker rooms, expanded patio space and updated decor.

The golf course continues to be the crown jewel of Rockrimmon Country Club and it has matured into one of the finest courses in the region. A major redesign of the 8th green and 9th tee complex in 2004 resulted in a spectacular risk reward approach shot into an 8th green, now guarded by water. More recent re-designs of the 1st and 10th greens, along with continuous investments in greens keeping technology and facilities upgrades have only served to solidify our legacy while honoring the vision and essence of the original architectural design. The club is host to many WGA, MGA and USGA competitions.

The success of Rockrimmon has always been rooted in its ability to change with the times and to react to the needs and desires of its members. Today, Rockrimmon events are more likely to include family barbecues than dinner dances, and the July 4th Formal has been replaced with an awe-inspiring fireworks display. Yet, the country club spirit and sense of community thrives. In 1993, it was among the first area clubs to become non-gender giving either gender the ability to join and the right to vote. Today, Rockrimmon is a non-denominational, family-oriented community for golf, tennis, swimming and social engagement. Just as the founders intended, Rockrimmon remains a casually elegant club in the country.